Minor Hurlers Earn a Draw in Rd 1 of Championship 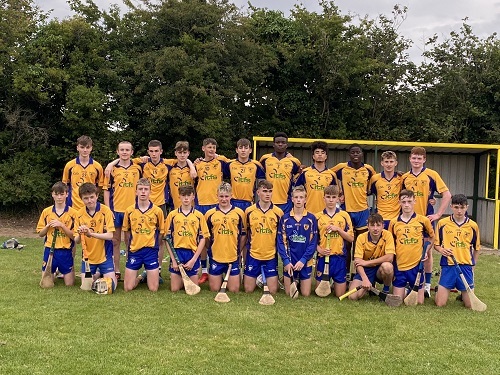 The Banner GAA Ennis and Whitegate played out a draw in round 1 of the minor hurling championship played at the Banner Grounds on the Shanaway Road tonight. In the early stages of the game it was end to end stuff, the Banners score coming from the excellent free taking of Scott O’Loughlin-Kelly and the always threatening presence of team Captain Sean McMahon. Cailum Henchy also getting on the scoresheet. Midway through the first half Whitegate struck for a goal. That score separated the teams at half time on a score line of 1-06 for Whitegate with the Banner having a tally of 0-06.

In the second half the Banner battled back well, with team captain Sean McMahon regularly finishing good points and O’Loughlin-Kelly continuing to score good frees. Whitegate to their credit always responded every time the Banner got a score. In their middle third Mikey Bogenberger, Liam Heffernan and Cailum Fahy got on lots of ball for Whitegate but were made to work hard to engineer scores by the intense work rate of the Banner players in defence and in the middle third of the pitch.

In the closing minutes the Banner had narrowed the gap to 1 point but then Whitegate struck again for 2 scores in quick succession and with 5 minutes remaining there were 3 points between the teams. In the dying minutes the Banner won a 20 metre free on the right wing. Ronan Kilroy stepped up to take the pressure free and despite the condensed goalmouth he blasted the ball to the net the level the match. Shortly after the puck out the referee blew the final whistle leaving the spoils shared with a point each on the Banners first game in the hurling competition in this 5 team group containing the Banner Ennis, Whitegate, Feakle-Killanena, Tulla and Ennistymon. Well done to the players on getting off to a good start in the competition and thanks to Whitegate for a fine sporting game of hurling.

This was a fine team performance from the Banner, with excellent work rate all over the field and a never say die team spirit.