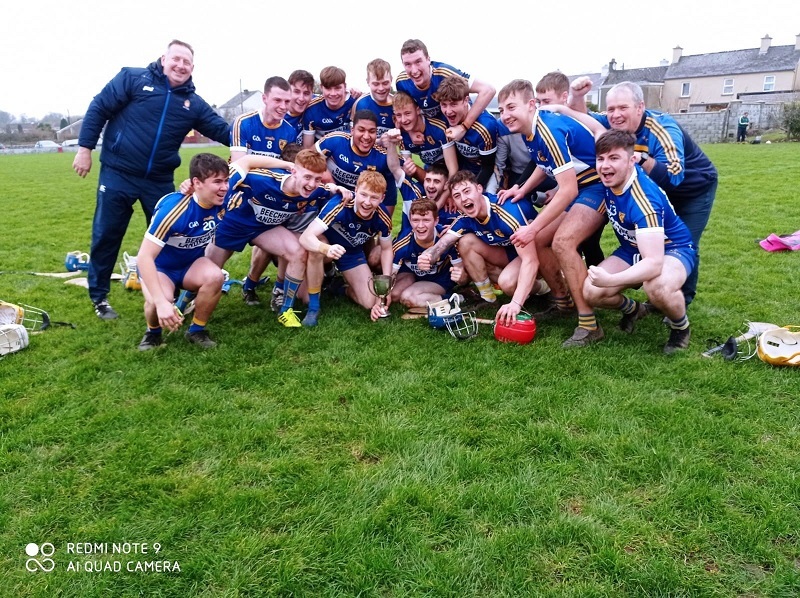 Considering the time of year, the conditions were reasonable for hurling and the players from both sides did not disappoint by serving up good quality hurling. Ennistymon got off to a reasonably good start and got two early points on the board. The Banner initially deployed intercountry senior star Shane Meehan at full forward and in the first quarter, Meehan provided spectacular entertainment for the spectators. He regularly raced out to win ball and he struck four exquisite points on the trot at high speed from both wings as the crowd gasped in admiration at his footwork, deft of touch and striking accuracy. At the first water break, the Banner lead by a scoreline of 0-05 to 0-02 with Ennistymon re-grouping trying to figure how to deal with the Meehan threat.

On the resumption of play, Ennistymon had a new plan and they deployed a sweeper to sit deep on the ‘D’, in front of Meehan, in an attempt to cut off the supply of ball that had been delivered in the first quarter by the excellent centre back play of Niall Walsh , and midfield pairing of Thomas Meenaghan and Brian Moloney. This Ennistymon sweeper tactic paid dividends with the deployment of wing-back Diarmuid Fahy to the sweeper role. Ennistymon’s Ciaran MacMahon having the unenviable man-marking job of trying to curb the Meehan threat. Nevertheless, in this second quarter, Ennistymon started to get a foothold in the game and stemmed the Banner flow for a while.

In this second quarter, other Banner players started to settle into the game with Ian Molloy launching more attacks from wing back and then centre forward Matthew McGrath and midfielder Thomas Meenaghan both contributing excellent points. By half time, the gap had narrowed to a three-point lead for the Banner 0-08 to Ennistymon’s 0-05.

For the second half Thomas Meenaghan was moved in to take up the full forward slot and Shane Meehan came deeper to midfield. Meenaghan now proved to be very effective on the inside line and his pacey runs and first touch caused all sorts of problems as both Niall Walsh and Meehan repeatedly delivered quality ball into space for Meenaghan to run on to. Aaron Kelly was introduced for Mark Cleary and he added to the score count with a blistering shot that produced a great save from Oliver Considine in the Ennistymon goal. Just before the final water break Meehan delivered a pin-point 50m pass to Meenaghan who took on his man and then flicked a pass inside to Dan Daly who controlled the ball and then delivered a first time rocket of a shot to the top right hand corner without taking the ball in his hand. This goal was crucial in shaping the outcome and as the sides went for the final water break the Banner had opened a 6-point gap 1-10 to 0-07. You felt at this stage that if the Banner could avoid conceding a goal that this lead might be enough to get the Ennis side over the line. With the mean and tough defending of Oisin McMahon and Ronan Marron in the Banner full backline, the Ennistymon goal that was needed did not look likely despite the hard work of Dara McInerney and Eoin Rouine in the North Clare sides inside line.

In the final quarter Ennistymon fought gallantly and added four more points to their tally but the Banner replied each time with great scores from the impressive young 17 year old Diarmuid Toner, subsequently added to by a point from play by Dan Daly. The Banner scoring trend continued with a monster long range 90m free from the inspirational centre back Niall Walsh and then Meehan was very accurate from frees as well as repeatedly feeding great deliveries from midfield to the new inside shooters.