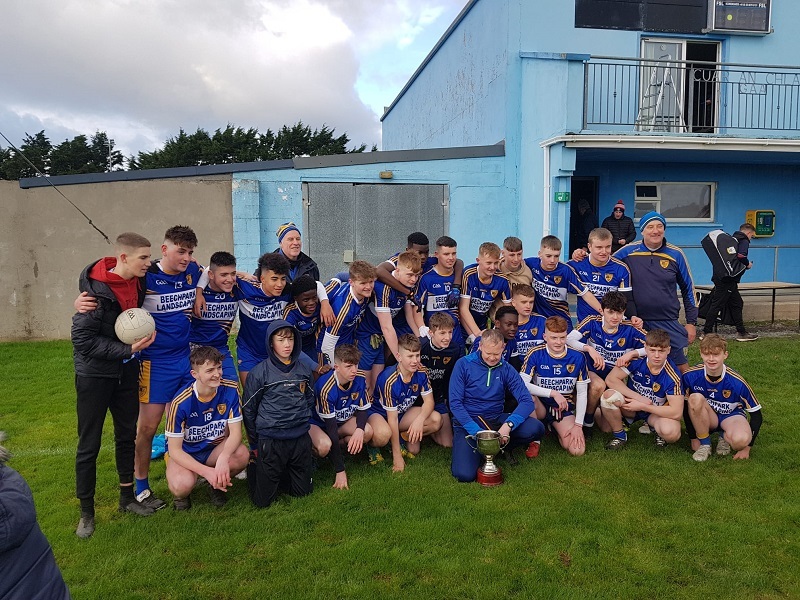 A Banner team with a mix of experience and youth took their first Minor B title in more than 30 years yesterday in an all Ennis derby county final against town neighbours Eire Og. The Banner side had 3 under 15 players in their starting 15 and this confidence in the younger talent paid off as the game played out.

Despite playing against the breeze in the first half the Banner took hold of this game from early on. Inspired by Clare minor star Séan McMahon who gave an exhibition of free taking off both feet every defensive indiscretion by Eire Óg was punished as the Banner built a lead of 0-8 to 0-3 at half time. Eire Óg struggled to deal with the speed and handling of the Banner and relied on the trusted left boot of Andrew McElwee to keep them in the game early on.

The Banner suffered a blow approaching half time as one of their inspirational young guns Conor O’Toole who was having a stellar performance at corner back was forced to leave the field due to injury.

Trailing by 5 points at half time Eire Óg came out all guns blazing in the second half .

Eire Óg continued to pose a danger up front and Séan Perril looked very threatening to goal when he got through on goal but it was not to be for Eire Og. Ronan Kilroy was on hand to make an outstanding block. It’s been a great few weeks for Ronan who played a central role in St Flannans College Dean Ryan hurling Munster Hurling Championship victory in the Gaeilic Grounds 10 days ago. Kilroy gave a phenomenal display from start to finish in this final.

The Banner kept marginally ahead in the second half through great team play and ball handling. Diarmuid Toner at centre forward together with Liam Hughes & McMahon upfront were a constant threat and were always supported with strong running from Johnson Mununkum and Bryan Gannon with Séan McMahon always available from play and placed balls to secure scores when required.

At the last water break the score was 0-11 points 0-05 points in favour of the Banner and in an effort to force the game, Eire Óg moved midfielder Fionán Treacy to full forward. It paid off immediately for the Eire Og side as Fionan goaled for the Clonroad More based side with 10 minutes left on the clock. The game was back in the balance at this stage and would go to the wire.

However the Banner side from the Lahinch Road and Shanaway road side of Ennis town responded well to the setback of the goal. Although under pressure now all of the defence led by Justin McGrath & the inspirational dispelled the onset of some dangerous attacks in the closing stages.

A tireless midfield of Fawhad Akinwale and Mufana Flynn dominated throughout and Cillian Ryan was steadiness personified in the goal.

Kaden Deegan Herlihy and captain Dylan Mooney were solid in the full back line throughout the match.

Along with McElwee, Luke Pyne, Eoin O’Regan, and Fionnan Treacy performed best for an Eire Óg club who have had a fantastic year themselves and should be proud of their efforts in this final. The game was played in a very sporting fashion throughout as the town neighbours went to to toe for championship honours.

However, this was the Banners day and they gave notice of the talent being developed in the club at all ages with all of the hard work that has been taking place in the club over the last 9 years since the breakup of the old urban board.

Congratulations to the entire playing panel who worked so hard over the last number of years and got their deserved reward yesterday. Congratulations also to Pat MacMahon and his management team for their tireless work and coaching.

Thanks to the referee Niall Quinn and his officials and to Cooraclare GAA which was the venue for this all Ennis clash and provided a well prepared pitch and facility as the neutral venue for this championship final.