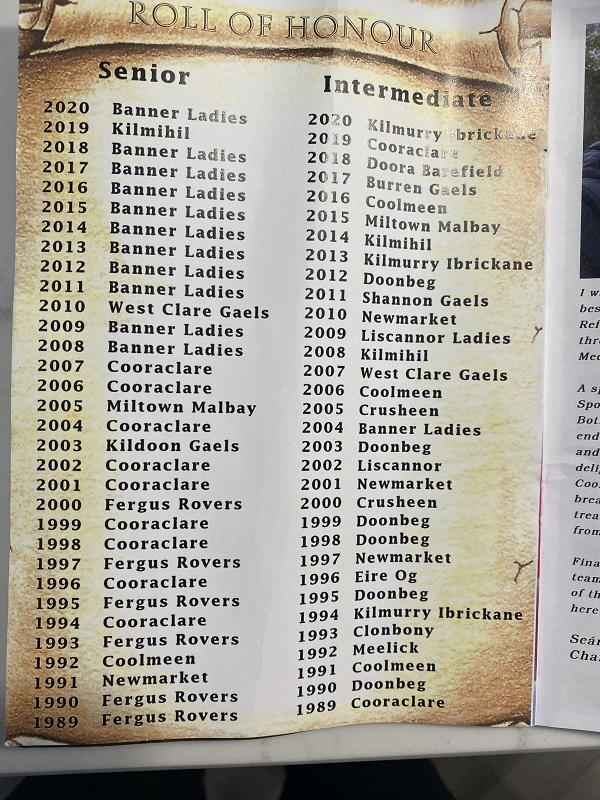 Everyone in the Banner GAA Club want to send our heartiest congratulations to the Banner Ladies Gaelic Senior Football team on winning the Senior Championship title on Sunday last. The game was played in Doonbeg versus Kilmihil on a nice day for football in front of a large crowd. The speed and physicality of the early part of the game was intense and the physios of both teams certainly earned their fees having to tend to players who took heavy knocks due to the sheer intensity of the fare. In the first half, Banner stalwart Louise Henchy had to leave the pitch with a knee injury and we send every good wish to Louise in her recovery and hoping that the diagnosis is not serious and that we will see her back on the pitch very soon.

After end to end exchanges early on, the sides were level at half time on a scoreline of 0-05 each, with centre forward Aoife Keane really impressing during that half. In the third quarter, the Banner side raised the tempo and by the final water break had opened a gap leading by 1-07 to 0-05. The introduction of all-star Clare player Niamh O'Dea was a key factor in the closing 20 minutes of play. In the final quarter the Banner pushed home leaving the final score at 3-09 to 1-05 with the impressive young Edel McNamara scoring the Kilmihil goal while the Banner goals came from Grainne Nolan, Laoise Ryan and Niamh O'Dea. Aoife Keane was awarded the Player of the Match Award after the game.

The is a truly superb Banner Ladies Ennis team. 12 Senior titles in 14 years is quite simply unprecedented in the annals of Clare GAA. Yesterday the winning team brought the cup to the schools of Ennis and there was great celebrations as the Yellow and Blue colours were celebrated in the town of Ennis. A lovely touch during Sundays game was the opportunity for the Under 10 Ladies Football teams from Kilmihil and the Banner to put on a half time display of their skills.

Huge congratulations and credit is due to the wonderful players who are such good role models for young girls playing sport. Congrats to the Banner Ladies Management and backroom team on being able to motivate a group to strive to such high standards for so long. And finally great credit is due to the committee in the club, with Chairperson Dorothy Meenaghan at the helm , working tirelessly at all levels from under 8's right up to the adult senior team. Enjoy the celebrations, ladies they are so well deserved.

The excitement is really building for the Minor B Champio...

Everyone at the Banner club wish to extend the best of lu...

Football Semi Final for Minors and U21 Campaign Commences

There are some important underage football games for the ...