U13 Footballers exit at 1/4 Final Stage after great Campaign 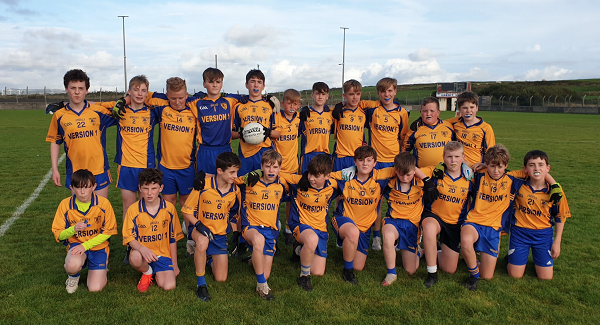 The Quarter Final of the u13 Divisions 2 Football Championship was played at Quilty on Wednesday evening, the Banner having to concede home advantage in the quarters draw. The conditions were good for football, with the pitch firm and dry. The Banner team lost out on the evening after a great campaign where they had some brilliant displays. Match report below. Hard luck boys, but great days ahead for this gang!

KiB won the throw-in, and in a fast flowing attack, opened the scoring with a fisted point. Already, KiB showed their ability on the ball, and their ability to attack quickly and to great effect.

The Banner however competed very well, and played some really wonderful football in that first quarter. Banner dominated the kickouts - their own and the oppositions - and wingbacks Tadhg Bane and Tom Sherlock got the measure of the fast wing forwards. Finn Duignan found himself in a real battle at centre back, marking KiB’s Conor Burke, a fast mobile forward who later showed his ability to take scores from distance and from angles.

Banner took control in that first quarter, with Sean Hegarty scoring 5 points, and Tom Williams adding another. Conor Coffey sealed what was a magnificent first-quarter Banner performance with a goal, leaving the score at the first water break Banner 1-6 KiB 0-1.

The water break also broke the Banner’s momentum: in the second quarter, they found the scores more difficult to come by, with Sean Hegarty contributing 2 points. KiB re-found their rhythm, and made some astute positional switches, which resulted in them getting a goal and 3 points.

The Banner were still in control of the game at half time, but the lead reduced from 8 points to 4: Banner 1-8 KiB 1-4.

It was a game of two halves, as the saying goes.

KiB’s Conor Burke moved into full forward, and played a roving role: KiB started to pull out the Banner defense, which had been so solid in the first half, and then counter-attack at pace. Banner’s defence, so solid and assured to this point, were now finding the space created by KiB hard to defend, and conceded 2-1 in the quarter, with Sean Hegarty and Tom Williams replying with 3 points.

It was all to play for in the final quarter: but the swift free flowing and incisive play seen by the Banner in the first quarter deserted them. The Banner still had probably the best share of possession, but were not getting through KiBs blanket defense. Some scoring opportunities were missed while the game was still in the balance, with a Zach Mulcaire point the only Banner score in the final quarter.

In contrast, KiB’s Conor Burke had found his range and his confidence was high: he put 6 unanswered points on the board for KiB, leaving the final scoreline Banner 1-12 KiB 3-11.

This was a disappointing end to the Banner’s run at the u13 Division 2 title, the game was there for us, but it was not to be on the night.

It was a most enjoyable game of football, the Banner lads showed a lot of class and heart, and the full squad should be proud of their achievements this season.

The excitement is really building for the Minor B Champio...

Everyone in the Banner GAA Club want to send our hearties...

Everyone at the Banner club wish to extend the best of lu...