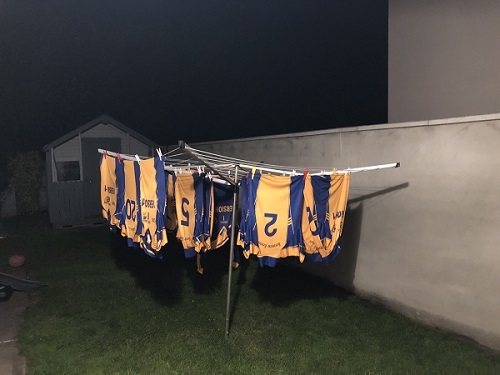 U14 Football U14 football championship 1st round

After the long lockdown period, the Banner U14s got their championship season off to a good start on Monday night last when the footballers had a first round win away to near neighbours Clarecastle. A physically stonger Clarecastle side matched the Banner for the first 15 minutes. After the first quarter the sides were locked together at 0-03 apiece. The early scores from the Banner were from Kaden Herlihy and Ronan Kilroy (1 from play and one from a free).

After the first half water break the Banner Ennis lads raised the tempo and made better use of their chances and worked the ball better together as a team. This resulted in more scoring chances, and in the minutes before half time the Banner got 3 crucial unanswered scores with points from Max Montwill, Frankie toner and very well finished goal from Cian Downey who rattled the net with his shot giving the Clarecastle goalie no chance.

In the second half the Banner pressed ahead and lead by 1-08 to 0-4 with ten minutes remaining. However, in the final 10 minutes Clarecastle battled back strongly and hammered home 2 goals to have the game on a knife edge with only 3 points between the teams entering injury time. Kaden Herlihy got some crucial scores in that final period to keep the Banner Ennis team either 3 or 4 ahead. In the end the Banner ran out 3 point winners in a very good contest, played as an ‘all-ticket’ affair due to the Covid restrictions. Due to the restrictions only 110 people were allowed into the venue including players, mentors and a very limited set of spectators.

On the night Oisin O’Rourke made some wonderful saves in goal. The full back line of Keelan Bane, Scott Kelly and Promise Jolashu were rock solid all night with Bane and Kelly regularly making long supporting runs into the attack and contributing to scores. Ben Smith and Caleb Walsh were dominant in the half back line, and Eoin Fitzpatrick has a solid game. In the middle of the field the aforementioned Kaden Herlihy made a vital contribution and chipped in with important scores while Conor O’Toole worked very hard was a leader for the Banner team on the night. As mentioned earlier Cian Downey and Ronan Kilroy got important scores, and Conal O’Reilly on the other wing covered every blade of grass in the middle third of the field regularly dropping to help his defence and be a key link up player in moving the ball from defence to our inside forward line. The corner forwards of Frankie Toner and Paddy Molony were busy and dangerous looking all night being involved in scores and proving a scoring threat themselves close to goal. Ruairi O’Donnell when introduce fought hard in the full forward and won a couple of important frees which lead to scores. In the final quarter as injuries and tired legs took hold, Vincent Crowley, Niall Casey and Jack Burke were introduced as substitutes as the Banner sought to secure the win and get 2 points on the Board in their group. The next football match is on August 4th versus the North Clare Amalgamation of Ml Cusacks/Kilfenora/Liscannor. This coming Monday is a change of code to hurling as the Banner u14s will travel to Ogonnelloe to play Scariff-Ogonnelloe in the first round of the hurling championship.