County Finals Excitement at the Banner GAA in Ennis 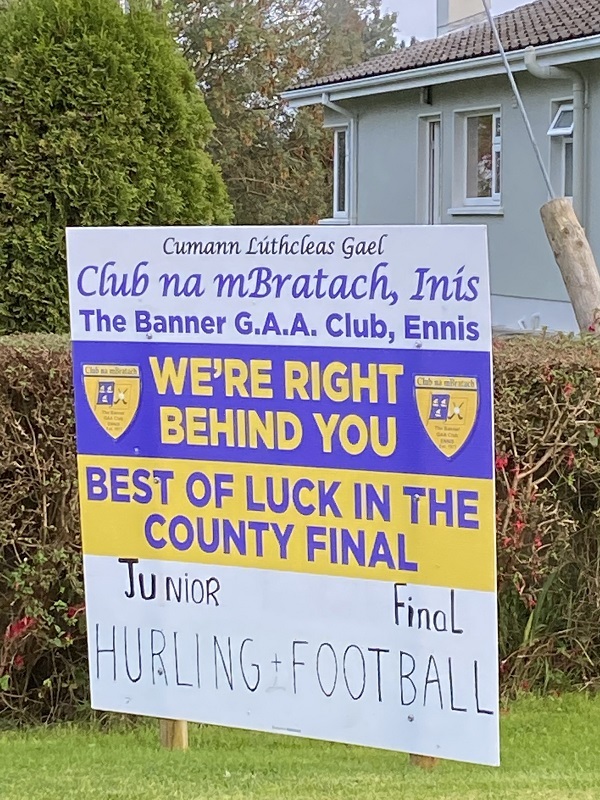 The excitement is building around the Banner GAA club in Ennis in advance of the first of 2 county final weekends for our adult teams. The Banner Ennis hurling and football sides are chasing another double of county titles over the next 2 Sundays. First up this Sunday is the Junior Hurling final versus Newmarket on Fergus in Shannon at 3pm. The Banner side will be attempting to avenge defeat to the same opposition at the semi final stage last season. Last year, just a week after winning the league title and promotion in the league to Junior A hurling, the Banner side suffered a heart breaking loss by the narrowest of margins to Newmarket. This coming Sunday at the final stage, they will attempt to get over the Championship winning line. En route to the final , the Banner GAA Ennis hurlers have had victories over Kilmaley, Tubber, Corofjn and most recently Meelick in the semi final.

There is great excitement within the club and in the neighbourhood this past week. Well done to our club volunteers who have put up bunting and flags along the Lahinch and Shanaway Roads and around the club house and GAA grounds entrance at the Banner. Our younger club members from under 6 to under 16 are also getting excited at the prospect of these finals. They are looking forward to welcoming the sides home in the coming weeks. Unfortunately most of the kids will not be able to attend the games to cheer on the hurling and football teams due to restricted attendances because of Covid.

Win or loose these finals, these young adult sides have given us tremendous entertainment and joy since the long drawn out days during lock down. All of the club are very proud of what has been achieved so far by these young men in 2020. Good luck to the players and management over the next 2 weekends . Ennis Abú, Banner Ennis Abú, an mBratach Abú. Up the Banner !!