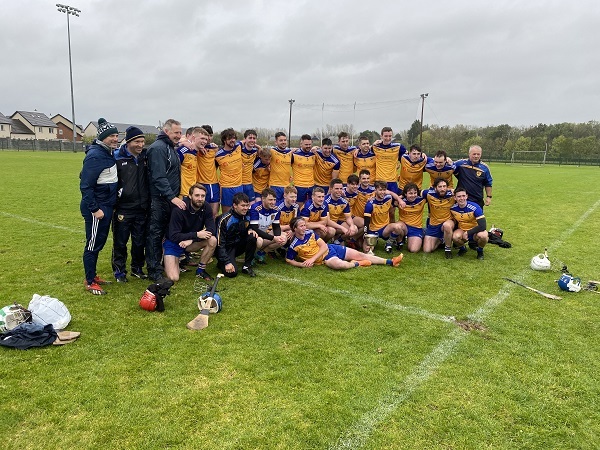 The Banner playing with a very strong breeze got off to a great start with an early goal from Fiachra Hayes after a great run and pass from Sean Collins. Further scores ensued from with 2 points from Collins and another from Ian Molloy. Then a free from Shane Meehan from 55 metres dipped at the last second and the ball went straight to the net much to the dismay of the unfortunate Newmarket corner back who when standing on the goal-line let the ball through his fingers. At the first water break the Banner lead by 2-04 to 0-01 with the Newmarket score coming from a pointed free from their main scoring threat from play and placed balls Martin Murphy. In the second quarter the Banner struggled a bit to really capitalise on their early dominance as the game stop started and Newmarket had their corner back dismissed for a second yellow card offence. Shane Meehan got 2 superb scores from play after moving out to the half forward line, outstripping his opponent for pace and shooting accurately from distance. Captain Jonny Martin who gave a leaders display all day at midfield added another score. Newmarket responded with 2 more scores, both coming from Martin Murphy, one from a free and a brilliant score from play from a really difficult angle near the left corner flag. At half time the Banner lead on a scoreline of 2-07 to 0-03.

With the strong breeze at their backs Newmarket fought hard to get back into the game but the Ennis lads were very disciplined in their work rate and tackling and they intercepted several Newmarket attacks with hooks, blocks and flicks that frustrated the opposition. In the second half Newmarket added a further 1-03 to their tally the points coming from 2 frees from Murphy and 1 from play from Ronan MacCarthy. The goal resulted from a ball lobbed into the square and it was difficult to see who poked it to the net but possibly Alan Hehir who got his hurley to it. The Banners second half scores came from Shane Meehan with 3, two from frees and 1 from play and Fiachra Hayes added a further score. On the day the Banner had excellent displays from the entire defence comprising two Rynne brothers, Ronan Collins, Niall Walsh, Darren Owens and Colm Duffy. At mid field Jonny Martin gave an outstanding 70 minutes and James Coakley was workmanlike before being forced off through injury. In attack Sean Collins tormented the Newmarket defence with his mazy runs, Ian Molloy had a dominating presence in the half forward line and Shane Meehan regularly lit up the pitch with his stick work and running. Thomas Meeneghan was a continuous threat in the forwards after being introduced. Each of the subs that were introduced made really important contributions.

After the game the Chairman of the Clare County Board, Joe Cooney presented the cup to the Banner’s winning captain Jonny Martin.