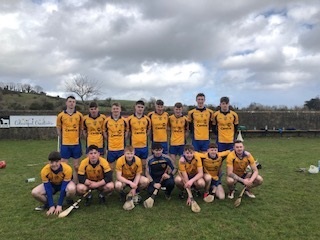 The Banner GAA Ennis got their 2020 competitive hurling campaign off to a winning start on Sunday with a win in the U21 Hurling Championship against Smith O’Brien’s. Playing into a strong wind for the first half, the Banner went on the attack from the throw in. Fresh from his exploits with St. Flannan’s on Saturday ( having played at corner back against the famed hurling nursery of St. Kieran’s College, Kilkenny), Niall Walsh at centre back, was the launch pad for much of the attacking play. With County dual star Shane Meehan lively through out, the Banner kept the score board ticking over nicely against the wind, and goals from Shane Meehan & Matthew McGrath set us up nicely at half time with the Banner ahead on a scoreline of 2:07 – 1:02. Thomas Meenaghan tapped over a couple of points during that half, & a long range free from Niall Walsh against the elements added to a confident team performance. Brian Moloney was busy in the half forward line also during that first half.

The Banner started the second half as they finished the first, and Aaron Kelly scored 2 fine points sandwiched between two Shane Meehan frees.

Smith O’Brien’s did put up a fight, but the ever dependable Martin McCormack and Oisin McMahon kept everything that was thrown at them at bay in the full back line. This is a very young team, and the older players lead by example, and Ian Molloy, Ronan Collins and Captain Cian Haugh played their parts effectively.

Note that training for 2020 has resumed for a number of t...