Not to be for U13 Hurlers 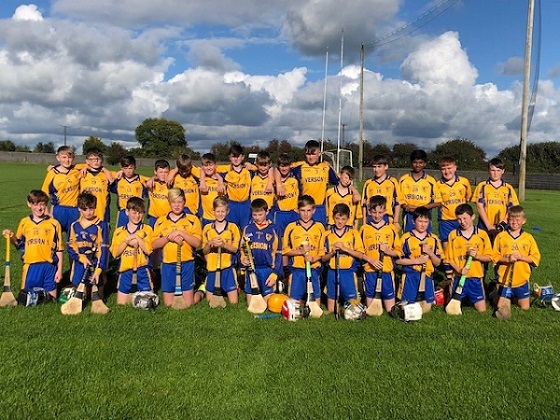 Our under 13 hurlers were in action on Sunday afternoon last at Clareabbey versus Whitegate in the U13C County Championship final. This was the second time that these 2 sides met in this competition with the Banner side winning on the first occasion in the group stages by a 9 point margin. In the final on Sunday however, Whitegate got the upper hand early on with a good start going 1-02 to nothing ahead early on. The Banner lads fought back bravely though and at half time there was only a point between the sides, on a scoreline of 1-05 to 0-07. At the start of the second half Whitegate got an early goal that put a bit of a margin between the sides. The Banner Ennis side never gave up and applied lots of second half pressure on the Whitegate backs but the goal that was required to get the Ennis side back into the game never came. The final score was Whitegate 2-10 to Banner 0-08. After the game the Chairman of Bord na nOg Iomaint presented the trophy to the Whitegate captain. This was a first County Final experience for the Ennis lads and their performances over the last 2 months in getting to the county final were a credit to them and on Sunday last they battled to the final whistle. All of the Banner's U13 Academy team were part of the panel on the day. the U13B Academy side will contest the U13B Academy Shield Final on this Sunday evening at 5pm versus Scariff Ogonnelloe in the Banner.

Note that training for 2020 has resumed for a number of t...

In order to burn off some of the turkey and chocolates , ...